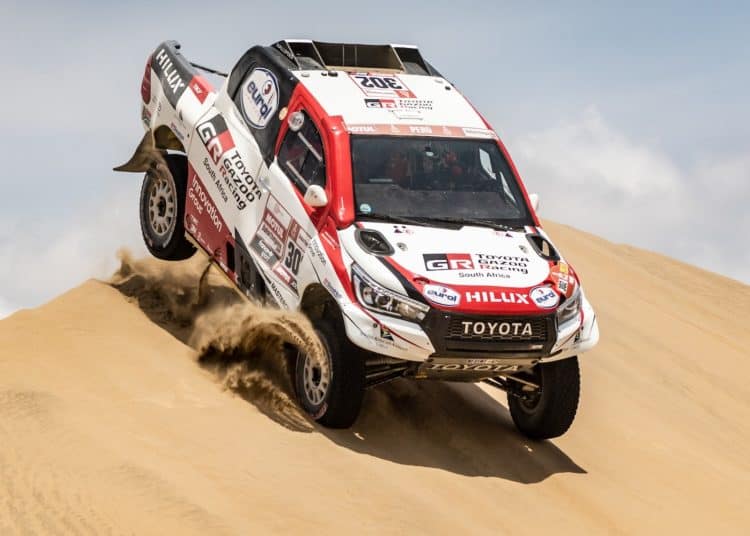 That has now finally happened as Qatari driver, Nasser Al-Attiyah, won the 2019 Dakar rally, held over 5000km and ten days in the challenging dunes of Peru. With a route featuring sand softer than snowflake baking powder, the 2019 event was a true off-road driving ability.

It’s the third overall Dakar win for the charismatic Qatari driver, who is now by far the most successful Middle-Eastern motorsport personality of all time. Of interest, especially to South Africans, is the vehicle that carried Al-Attiyah to victory.

The Gazoo Racing Toyota Hilux is designed and built in Johannesburg. It is prepared, serviced and doted upon by a team of brilliantly resourceful South Africans. For them, it has been a journey of many creditable podiums since 2012, and now finally: a very deserved overall victory.

Glyn Hall is the visionary engineer and team boss who has executed Toyota’s master strategy for a Dakar win. Although born and raised in Wales, he has spent most of his adult life becoming an institution in global motorsport engineering circles, using South Africa has a home base.

Reporting to Hall is a team of deceptively youthful technicians, brimming with enthusiasm and that typical South African resourcefulness which is crucial to keep the Dakar racing Hilux bakkies going, even when sandstorms engulf their service area.

For a brand which has built a dominance of the local market on the reputation of its bakkies, a Hilux win is of incalculable marketing value to Toyota. It also validates the faith put in local engineers, technicians and team management – all of whom were entrusted with an international project of great esteem and have delivered accordingly.