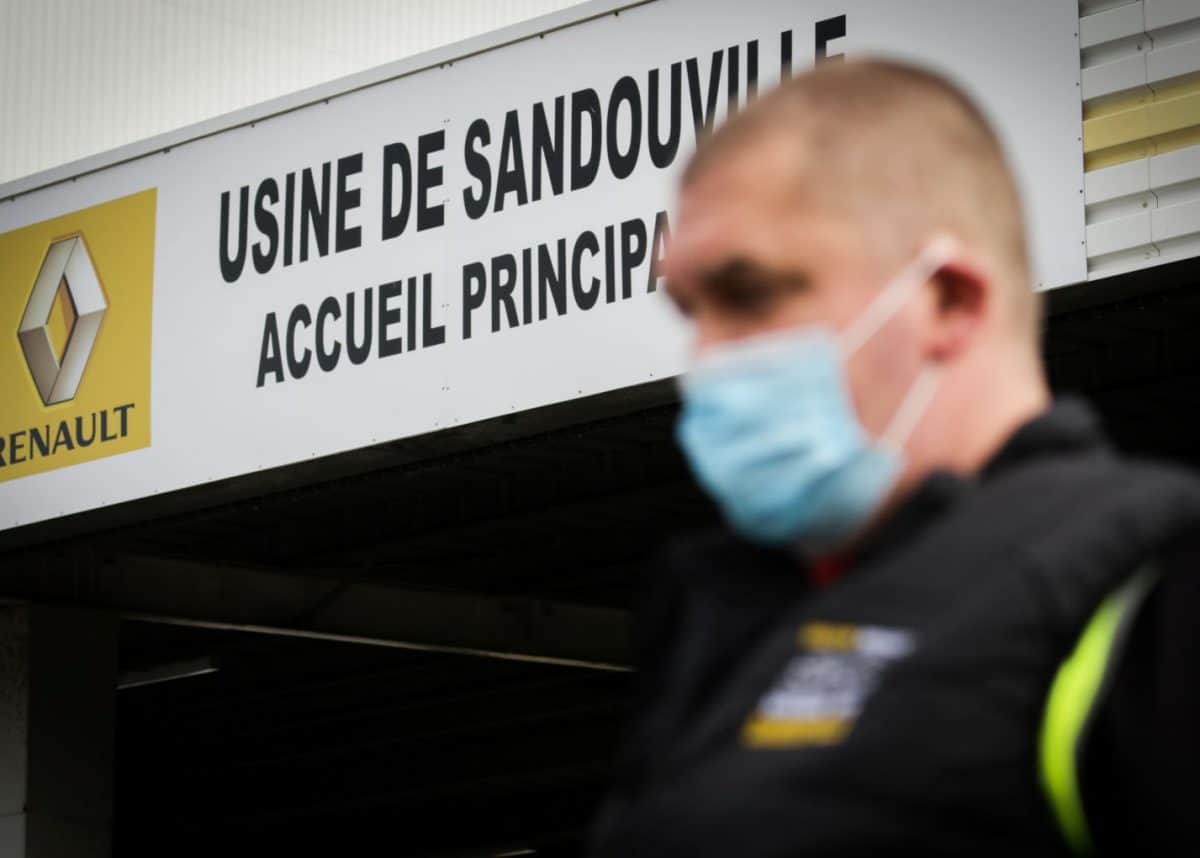 A worker of the Renault factory of Sandouville, near Le Havre, northwestern France, wears a protective facemask as he stands in front of the entrance of the the plant, on 22 May 2020 on the reopening day, as France eases lockdown measures taken to curb the spread of the COVID-19. The factory of French car manufacturer Renault reopened in Sandouville (Seine-Maritime) reopened on the night between 21 and 22 May 2020, two weeks after being condemned for sanitary measures deemed insufficient to fight against the spread of the COVID-19. Photo: Lou Benoist / AFP

In 2017 and 2018, the Franco-Japanese industrial alliance had ranked the world’s biggest automaker with sales of 10.6 million passenger cars and light commercial vehicles.

But by the end of 2019, if the wheels have not quite come off, the two have nevertheless had a bumpy ride, after the man who oversaw that achievement, Carlos Ghosn, fled a trial in Japan over allegations of financial misconduct, and surfaced in Lebanon.

Digesting that scandal was one thing. Coping with the economic mayhem wrought by the coronavirus pandemic was a task of a completely different dimension.

Ghosn’s expansion strategy of the past now appears to hail from a galaxy millions of light years away.

Today, the alliance is looking to cut back production capacity in view of the economic fallout from the COVID-19 pandemic as the two carmakers — which had previously accounted for some 10% of the global auto market — realign themselves to the new reality.

The outlook already looked bleak enough last year, after Renault recorded its first loss in a decade on sagging sales. Then along came the novel coronavirus that all but paralysed the production line and sales points, particularly in Europe.

In the words of the French finance ministry, Renault is now “fighting for survival”.

Nissan too, in which Renault holds a 43% stake, is set to reveal heavy losses when it publishes its 2019/2020 results on Thursday.

Ghosn had been targeting sales of 14 million by 2022, including five million for Renault. But that now looks ambitious.

During the course of this week, the alliance will lift the veil on its strategic plans for the future.

Another member of the alliance, Mitsubishi Motors, one-third owned by Nissan, has similarly hit hard times and is is preparing to reveal its own plans in late July or early August.

Nissan sees its priorities as centred firmly on its core markets — Japan, China and North America, an informed source told AFP. It is losing “a lot of money” in Europe.

That could spell danger for the Nissan factory at Barcelona, judged as being over-capacity, although the source indicated the future of the Sunderland plant in northeast England looks assured despite Brexit.

Japanese media reports say the group could slash its worldwide workforce by 15% by early 2023.

At least the coronavirus shockwaves have pushed the Ghosn controversy off centre stage.

For Nissan, any negative feelings towards Renault and the French state in the wake of the Ghosn saga have been put aside “because the coronavirus is a much more important problem”, notes Tatsuo Yoshida, auto sector analyst for Bloomberg Intelligence.

“Nissan, Mitsubishi and Renault don’t have any time to lose if they want to survive this crisis,” he told AFP.

Renault needs to plot a route back into the black if it is to keep the French government onside amid concern over the potential direct or indirect fallout from the virus on jobs.

With Paris voicing fears that Renault could disappear without state support — France retains a 15-percent stake in the carmaker — the government is set to approve a five-billion-euro ($5.4 billion) loan package, although environmental strings will be attached.

Paris will also want guarantees on keeping maximum production within France — several models are currently produced in lower-cost countries abroad, such as the Clio in Turkey.

Responding to media reports of possible closures in France, Prime Minister Edouard Philippe warned last week that the government would be “intransigent” on the issue of keeping production on home soil.

But the challenge is a sizeable one.

Renault said in February, before the pandemic really took hold, that it was targeting two billion euros in savings over three years and would not rule out site closures.

Or, as interim CEO and former financial officer Clotilde Delbos put it: “No taboos.”

— By Tangi QUEMENER / with Etienne BALMER in Tokyo © Agence France-Presse

Help support journalists, the guardians of independent journalism, through our student media initiative that gives a voice to students and their generation! Find out more…Tags: Carlos GhosnNissanrenault