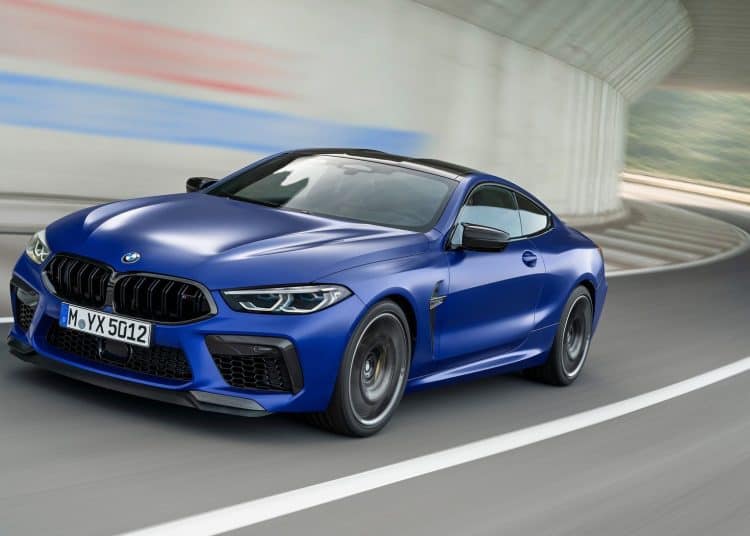 BMW has finally revealed its first ever M8. The company’s new high-performance coupe is evolved from the second-generation 8 Series platform, which debuted globally late last year.

For followers of the ‘Werke, they now have option on a large two-door performance car from BMW again – after the M6 was discontinued.

A raft of styling upgrades distinguishes the M8 from its 8 Series siblings. These include wing mirrors in carbon-fibre, the signature BMW grille kidneys in a dark carbon finish and also aero gills, located at near the door shutline, in dark carbon. The M8 also rolls a set of exclusive bi-colour 20-inch wheels.

BMW is marketing the M8 in two grades, a standard and Competition option. Both are powered by the same 4.4-litre twin-turbocharged V8 engine, although in the Competition M8 this engine is good for 460kW, whilst the ‘standard’ version has slightly less power, at 441kW. Torque ratings are similar in both M8s, at 750Nm.

Drive is to all four wheels, via an eight-speed automatic transmission. BMW’s engineers have configured the M8’s all-wheel drive system to be mostly biased to the rear axle, allowing drivers to enjoy the engaging, rear-wheel drive handling attributes that BMW performance cars are renowned for.

Perhaps the new M8’s most interesting engineering feature, concern its brakes. Customers will have option on a carbon-ceramic brake system, but also an M-specific integrated brake system – which allows a driver to adjust the sharpness of their M8’s brake pedal feel.

How quick? BMW claims the standard M8 will run 0-100kph in 3.3 seconds, whilst the Competition version is a tenth of a second quicker. Both cars are limited to a 250kph top speed, although there is the option to have that derestricted to 305kph.

BMW South African expects its first consignment of M8s to arrive locally before the end of this year.