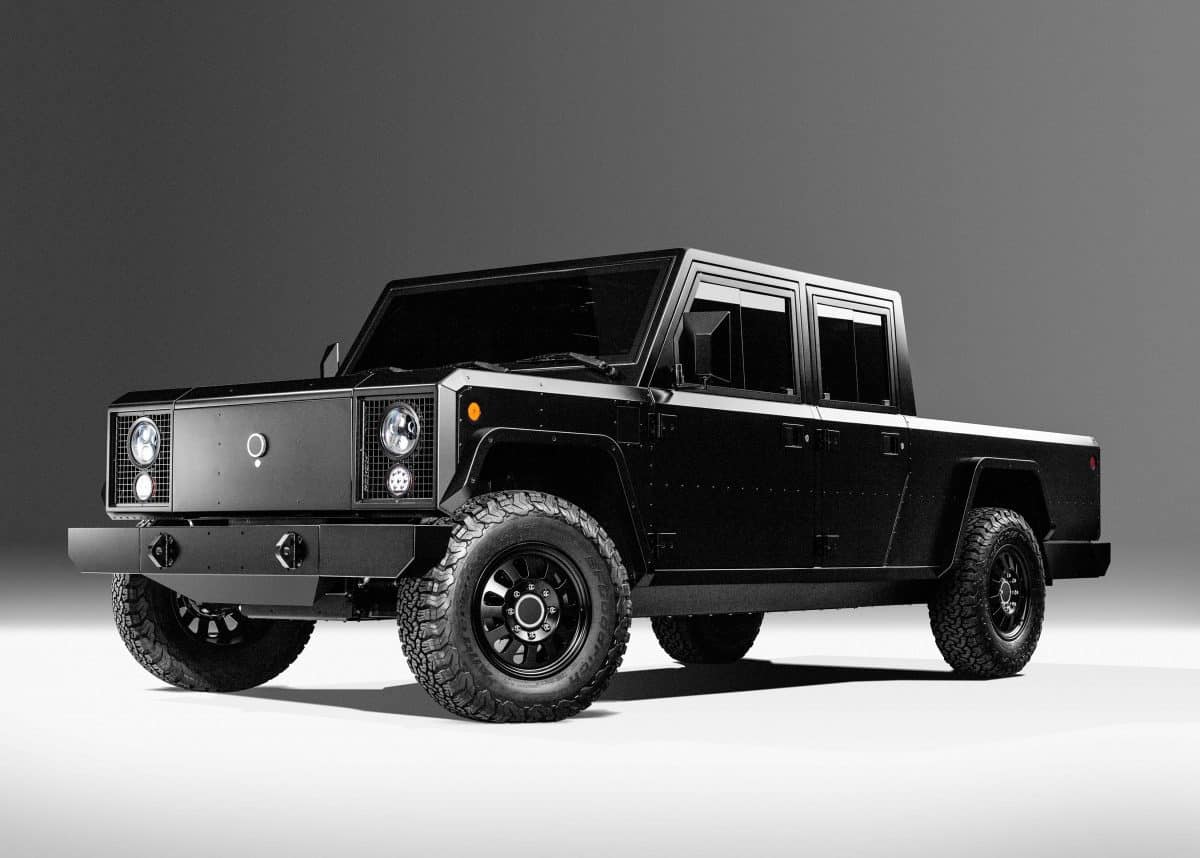 Bollinger are rushing to be the first brand to sell you a battery-powered bakkie.

The Michigan start-up has revealed a production version of its B2 double-cab, and the specifications are very impressive.

When Bollinger originally previewed its bakkie concept, the vehicle was powered by a 100kW battery. That capacity has now increased to 120kWh.

To put the energy density of that battery pack in perspective, Porsche’s new Taycan Turbo S electric sportscar, has a 93kWh battery.

The Bollinger B2 might not look very futuristic, but that is very much a design feature. It is not being marketed at leisure vehicle owners, but at serious off-road utility users.

Engineered with very square proportions, Bollinger has constructed the B2 bakkie to be modular. The bodywork is easy to remove, allowing owners to fit new panels if the bakkie has been damaged during very technical and challenging off-road work.

Loadability is outstanding, far outclassing most conventional double-cab bakkies. The B2 will carry 2400kg in its loadbox, which is nearly double what most turbodiesel double-cabs such as the Toyota Hilux or Ford Ranger can manage.

Even cleverer is its open-cab design, which allows the rear panelling between the seats and load area to be unlatched, creating an enormously long load space. Perfect for when you need to move wood beams or steel pipes.

Bollinger is promising unparalleled performance with its B2. Two electric motors drive this bakkie, one at each axle. Combined outputs are 452kW and 906Nm, figures which would easily class this bakkie as a supercar.

Performance is monumental, with the B2 capable of 0-100kph in 4.5 seconds. Bollinger have limited top speed to 160kph, which is sensible considering its rather unsophisticated aerodynamics and boxy shape.

Featuring locking differentials on both axles the Bollinger B2 should be hugely capable in extreme off-road terrain. Ground clearance is immense, with Bollinger allowing owners to configure the B2 with up to 500mm of obstacle rolling clearance.

One aspect of the B2 which Bollinger is not yet at liberty to confirm, concerns this bakkie’s range.

Although there has been no mention of price, Bollinger is committing to a delivery date of 2021 for its battery bakkie.

The only possible issue with its B2, is the absence of airbags. Bollinger says that despite initial interest for 30 000 vehicles, it will not be offering an airbag option in its production version of the B2.

Bollinger is positioning its B2 as a rugged exploration and work yard bakkie, instead of a lifestyle activity double-cab. In some way, it is a contemporary battery powered version of the original Land Rover Defender product values.

The notion of a new vehicle which does not have airbag occupant crash safety protection is bizarre. Despite this, Bollinger might be quite intuitive in attempting to service a market segment which still pines for the uncomplicated ownership proposition of a work focussed, and adventure capable, off-road vehicle.