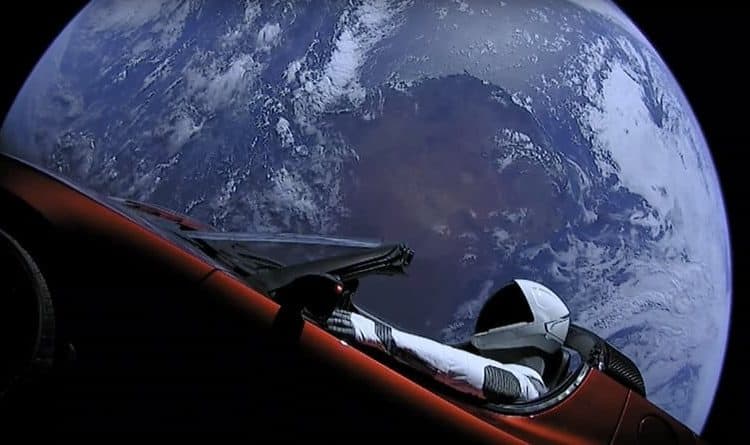 Nothing defines disruption better than launching your own car, build by your own car company, into space, on a rocket, built by the space exploration company you own too. But that’s Tesla.

Elon Musk, the world’s most celebrated Pretoria Boys old boy, this week accomplished the impossible by disrupting space exploration forever with is Falcon Heavy rocket system. Unlike most other rockets, the Falcon Heavy returns to earth after delivering its payload. That makes it ten times less expensive per mission.

Many thought Musk’s rocket would explode on launch, but it didn’t. For a man who is revolutionising transportation, with his earth-based range of electric vehicles under the Tesla brand, part of the first payload carried by a Falcon Heavy was hugely symbolic. It was Musk’s very own company car. A Tesla Roadster.

The red Roadster was one of the original production models from 2008, when Musk finally defied convention and delivered an electric sportscar to market that people wanted to buy. Since then Tesla has added three more models and it’s planning an electric truck venture too, to make global logistics closer to becoming carbon neutral.

In a world of original marketing there is perhaps no other car brand which will ever be able to usurp the sheer drama and grandstanding of Tesla’s SpaceX launch. Footage of the orbiting Roadster, with a spacesuit wearing mannequin at the wheel, was the stuff of a creative director’s absolute fantasy.

Musk is a perfectionist and detail obsessed, hence the Roadster’s onboard infotainment screen reading ‘Don’t Panic’ during its live streamed orbit. This was an obvious reference to the Douglas Adams classic about accidental space travel, “The Hitchhiker’s Guide to the Galaxy.”

The eventual fate for Musk’s Tesla Roadster and its pilot, appropriately named Starman – as a homage to Dawid Bowie, is unclear. If it avoids asteroids, it could last for an extraordinarily long time in outer space. Hundreds of thousands of years, in fact. How? Well, in an environment devoid of both oxygen and water, there is no possibility of rust or material degradation.

Help support journalists, the guardians of independent journalism, through our student media initiative that gives a voice to students and their generation! Find out more…Tags: Elon MuskSpaceXTesla