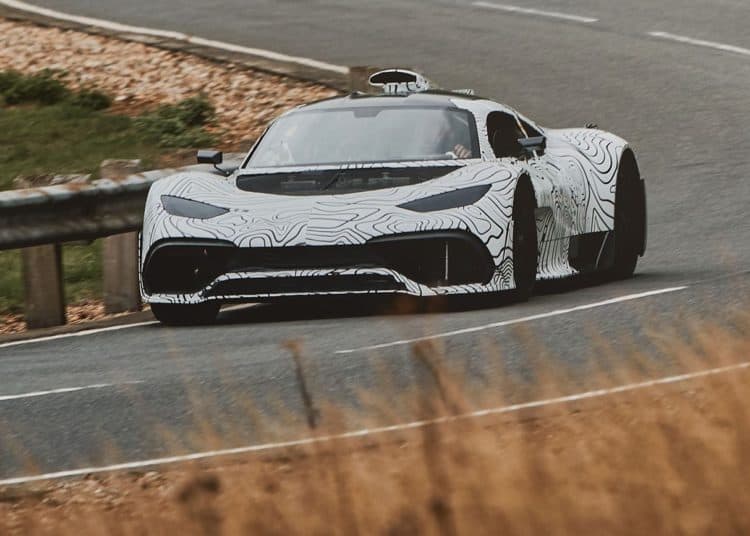 Mercedes-Benz has confirmed that final certification testing of its most ambitious road car has begun. Simply called the AMG Project One, the German has committed to building only 275 of these hypercars, and camouflaged test mules are currently circulating race tracks and secret locations in the United Kingdom.

It would appear odd that Mercedes is admitting its most radical road car is underdoing final validation evaluation outside of Germany, but the Project One hypercar uses an engine straight from F1. And Mercedes-Benz’s impressively successful F1 team is headquartered in Northamptonshire, so the synergy of location for testing – in the U.K – is entirely sensible.

Stuttgart’s performance subsidiary, AMG, has assumed responsibility for the overall project and one of the most pronounced engineering issues has been containing the noise and vibration from that 1.6-litre turbocharged V6 engine.

It might sound like a small problem, 1.6-litre engines are used in most hatchback family cars, but with an ability to produce 750kW the accompanying noise and vibration generated by freeing up all that energy is substantial. The Project One’s V6 will crank to a maximum engine speed of 11 000rpm, much faster than any rival hypercar from Ferrari or McLaren.

Repackaging the F1 sourced engine hasn’t been easy, especially as AMG has converted its gearbox from rear- to all-wheel drive. There is no doubt that all these engineering challenges serve a very clear purpose: building the most driver-focussed vehicle ever to wear a three-pointed star.

AMG’s engineers have admitted that keeping the Project One test cars secret is hugely challenging, due to their unique – and loud – sound signature. The idea of taming an F1 engine for road car use would be ridiculous to most but Mercedes-Benz’s determination was to showcase how valid its four F1 World Championship constructors’ trophies have been, tricking technology from the track to the road car production line.

Expectations for Project One are lofty. AMG has mentioned a top speed of 350kph and dramatic acceleration to match – as one would expect from a road car powered by a championship winning F1 engine. One would also expect nothing less from a car which will eventually carry a R30m price tag when delivered to its very lucky owners, in 2019.

Help support journalists, the guardians of independent journalism, through our student media initiative that gives a voice to students and their generation! Find out more…Tags: AMGF1mercedes