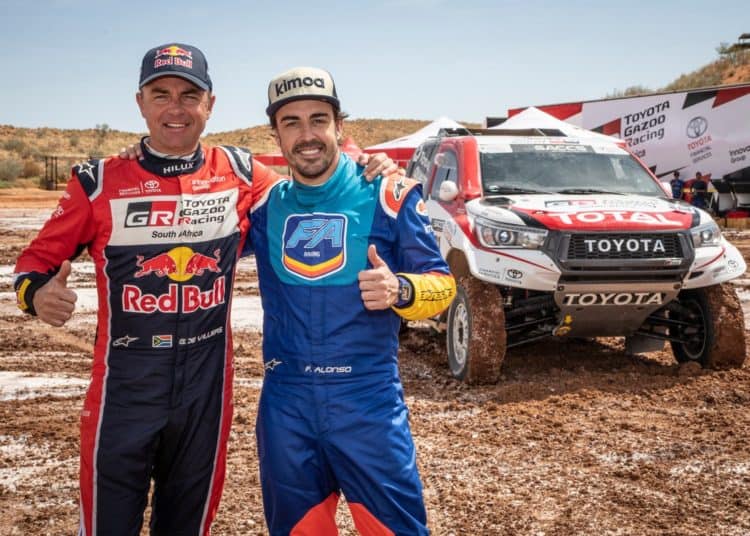 One of the greatest F1 divers travelled to Upington, for an opportunity to test the world’s best off-road racing bakkie: Toyota’s Hilux V8 double-cab.

Built in Johannesburg by Hallspeed, the Gazoo Racing Hilux V8 was victorious at this year’s Dakar rally raid in South America. It is considered the best vehicle of its type for extreme off-road racing and as such, piqued the interest of double F1 driver’s world champion, and current Toyota endurance racing driver, Fernando Alonso.

Since retiring from F1 last year, Alonso’s been exploring a diversity of motorsport activities. He received special permission from Ferrari to race for Toyota at the prestigious Le Mans 24-hour event in France last season and was part of the winning team. This year Alonso has raced and won at America’s premier endurance race, the Daytona 24 hour.

With Giniel de Villiers acting as a guide, Alonso was under expert tutelage to make the most of his two-day test experience with the Gazoo Racing team at Goera pan this week. Powered by a 5-litre V8, producing 287kW and 620Nm, the Dakar specification Hilux bakkie impressed Alonso. “The Hilux feels great; it has good grip and balance, lots of power and impressive braking. It felt incredible to drive this car.”

Using two test laps, one 8km in length the other slightly more than double that at 17km, Alonso managed seven hours behind the wheel, totalling 400km.

The mastermind behind Toyota South Africa’s unprecedented global racing success with Hilux, Glyn Hall, was delighted with the Alonso’s adaptability to an unfamiliar racing vehicle and extreme Kalahari dessert terrain. “Rally raid is a totally different discipline compared to circuit racing, but Fernando made impressive progress and looked like he had a lot of fun in the process.”