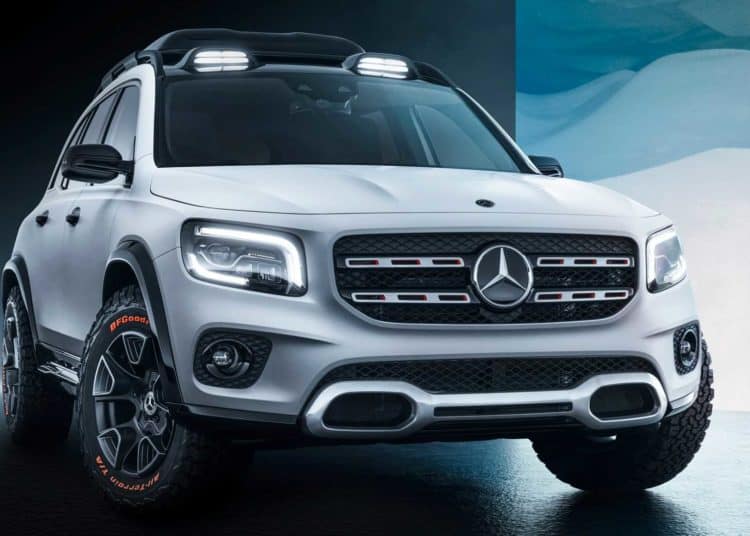 This week’s Shanghai auto show will see the debut of a new Mercedes-Benz SUV, positioned between the brand’s smallest and mid-compact gravel travellers, called the GLB.

Although Mercedes-Benz staff refer to its as the GLB concept, the likelihood is that this new compact SUV will be in production before the end of the year. Ranked within Mercedes-Benz’s portfolio the new GLB is bigger than GLA, but slightly smaller than GLC.

The Shanghai show car might roll extreme terrain BF Goodrich tyres and feature an elaborate roof rack structure, with embedded LED lights, but most of the its actual bodywork should be translated into the final production GLB – although the tyres and roof rack might nots. Some of the most notable exterior design feature include a new-look headlight design, with intricate LED illumination, and around the rear there’s an entirely new tailgate, featuring a concave centre.

What is Mercedes-Benz aiming to offer with its GLB? That’s quite simple: a compact seven-seater SUV. This new Mercedes SUV’s product purpose becomes evident when you consider the clever engineering applied to its cabin architecture.

To accommodate three rows of seating in a compact SUV, usually means that the rearmost seats are impractical for adults and only suitable to small children. Mercedes says that its engineers have devised a solution to ensure that third-row passengers are comfortable on long journeys in a GLB, even if they are adult in size. Achieving this is an adjustable second-row seating configuration, which can be moved forward by 90mm, thereby gifting third-row passengers more legroom.

Beyond the bold exterior design and clever middle-row seats, the GLB features the latest Mercedes-Benz compact vehicle engine and drivetrain. Powering it is a 165kW version of Mercedes-Benz’s 2-litre turbocharged engine, with an eight-speed dual-clutch transmission transferring that power to both axles. GLB powers all four wheels in an 80/20 front-wheel drive bias, although an equal 50/50 front-to-rear-wheel drive locking function can be enabled for gravel road or sand track driving.

In the South African market, only VW offers a mid-compact SUV with seven-seats and a sophisticated 2-litre turbocharged powertrain, in the guise of its Tiguan AllSpace. Mercedes-Benz has undoubtably identify a niche, that VW held as its own – and is intent on exploiting it with the new GLB.