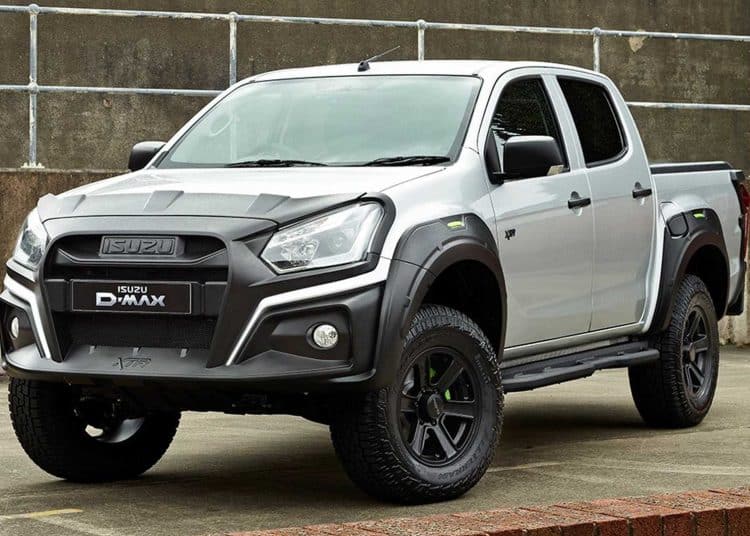 As Ford prepares to launch its Ranger Raptor bakkie in South Africa this month, Isuzu has shown that it might also have something to excite fans of the brand.

Demand for extravagantly styled and more off-road capable bakkies show no sign of weakening and Isuzu has responded with a special edition version of its D-Max double-cab 4×4.

This new derivative is aimed at those who are committed to off-road adventure driving and enjoy attracting attention in a vehicle which features some outlandish design elements.

Isuzu’s named it XTR and it adds a lot of black plastic protective cladding to the conventional D-Max bodyshell. The wheel arch extensions are detailed with green highlights and those are repeated on the brake callipers too, which are lime in colour. Rolling the XTR along are 17-inch wheels, shod with Pirelli Scorpion all-terrain tyres.

By far the most impressive bit of this XTR’s styling package is its radically remoulded front bumper, which features an integrated bash-guard and bonnet protector. Inside, XTR logos adorn the seats and green hued stitching can be seen on the steering wheel.

Capabilities to match the appearance

Isuzu’s XTR has a notably more aggressive stance than the brand’s standard D-Max 4x4s, thanks to an off-road specific suspension upgrade from Australian specialist supplier, Pedders. The new suspension bits lift XTR’s ground clearance to 250mm, which is 11% higher than a conventional D-Max and should improve ride quality and traction in technically demanding off-road terrain.

What is most interesting about Isuzu’s XTR evolution of the D-Max bakkie, is the engine, which is only 1.9-litres in capacity. Despite its diminutive size, this turbodiesel does manage to peak 120kW of power and 360Nm of torque. Those numbers might be 10kW and 20Nm shy of the 3-litre engines most South African Isuzu fans are familiar with in the D-Max, but it is also much lighter on fuel.

The XTR will initially launch in Europe, with availability into other markets as the year progresses.