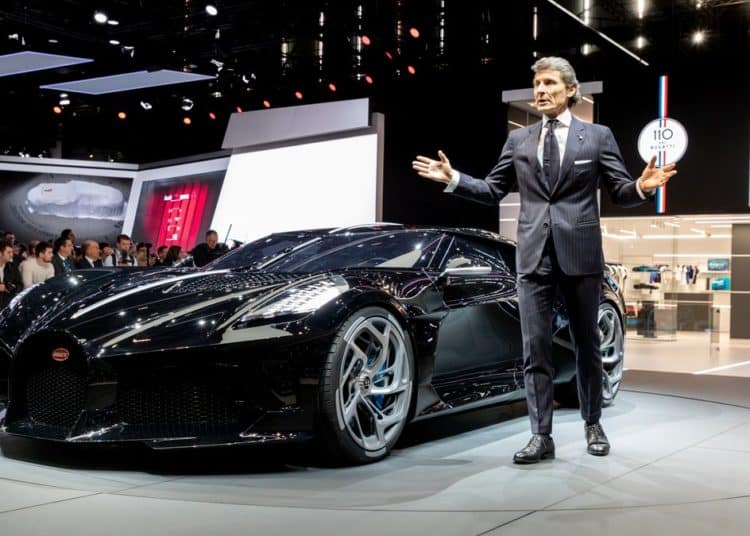 CEO Stephan Winkelmann at the unveiling of the Bugatti La Voiture Noire at the Geneva International Motor Show in Switzerland / (Photo: Twitter / Bugatti)

The Bugatti La Voiture Noire (the black car) was sold way before it was manufactured. The beastly hypercar is now the most expensive new automobile ever manufactured.

How much was Bugatti La Voiture Noire sold for?

Why would Bugatti build a car that almost three quarters of the world’s population could not afford? The French car manufacturer, in 2019, is celebrating its 110th anniversary.

As reported by the Digital Journal, the hypercar was unveiled at the Geneva International Motor Show, in Switzerland, on Tuesday, 5 March.

Those who could afford to purchase it were let down by the news that the car already had an owner.

An unnamed individual claimed this one-off, black-on-black, beastly beauty for an estimated $18.9-million. That, friends, equals to R272.7-million — one forth of a billion rand.

‘The perfect form, with a perfect finish’

By default, this makes it the most expensive new car ever manufactured. The La Voiture Noire is everything a wealthy man needs. It has the luxurious comfort of a limousine yet it sports the engine and muscle of a hypercar.

Bugatti’s designer, Etienne Salomè, stated that there was nothing more they could improve about the car’s design.

“Every single component has been handcrafted and the carbon fibre body has a deep black gloss only interrupted by the ultrafine fibre structure. This is a material that has been handled perfectly.

“We worked long and hard on this design until was nothing that we could improve. For us, the coupé represents the perfect form with a perfect finish,” Salomè said.

It is the reincarnation of the classical Bugatti Type 57 SC Atlantic, which coincidentally, celebrated its 80th anniversary in 2019.

According to Car Folio, these are the standout features and specifications of this hypercar:

The new hypercar has officially dethroned the Rolls Royce Sweptail, a one-off supercar that was sold for an estimated $13-million (R187.5-million)

This #Bugatti is worth $19 Million! Which makes this car the most expensive new car ever made!…Is it worth it? ??? @supercarblondie @worldstar #WSHH

Help support journalists, the guardians of independent journalism, through our student media initiative that gives a voice to students and their generation! Find out more…Tags: carsSwitzerland