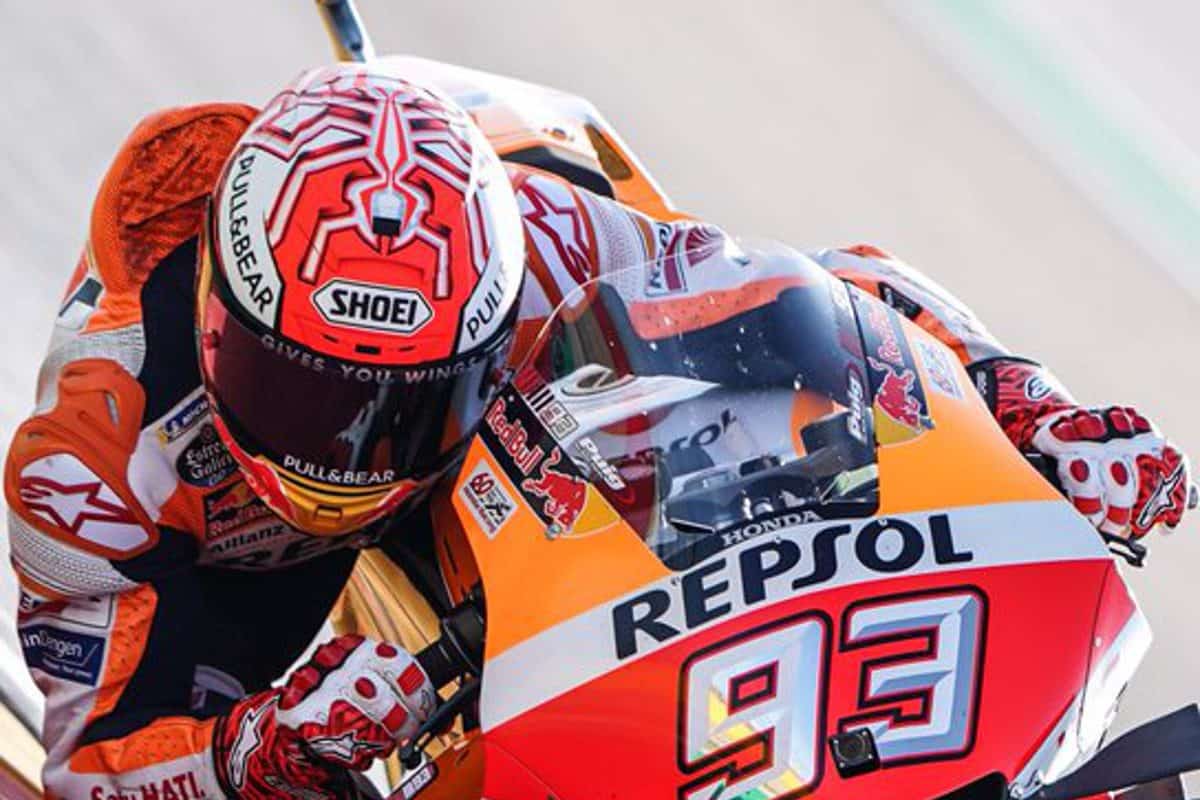 Marc Marquez is a six-time MotoGP World Champion having secured the 2019 championship with a victory in Sunday’s Thai MotoGP, denying rookie rider Fabio Quartararo a first win in the premier class.

The Honda rider outscored title protagonist Andrea Dovizioso by 12 points on the day to cruise to a comfortable victory in the Riders’ Championship – and did so with four races to spare.

Such has been Marquez’s form in 2019, he arrived in Thailand with eight wins on the board, five runner-up results and only one non-score.

As such the Spanish rider, 98 points to the good, needed to outscore his only rival, Dovizioso, by two points on Sunday to wrap up his eight overall title.

But in true Marquez style, he didn’t settle.

From the pain of crashing to the joy of the win

He came out firing in Friday’s first practice only to suffer a massive high-side at Turn 7.

Winded and hurting, he was taken to a local hospital for an MRI but suffered nothing worse than bruising to his back and legs.

He was back on track hours later before qualifying his Honda RC213V in second place on Saturday.

Quartararo grabbed the holeshot into Turn 1 ahead of Marquez, Maverick Vinales, Franco Morbidelli and the Ducatis.

Marquez, despite being told by his Honda team prior to the race that the win wasn’t necessary, launched an early challenge into Turn 3 only to run wide and let Quartararo back through.

The duo ran first and second as they distanced the field, including Dovizioso who was up to fourth.

Lap after lap Marquez dogged Quartararo, making two further attempts at Turn 3 before lining up the Frenchman on the final lap, this time making it stick.

The Yamaha rider tried to fight back at Turn 12, briefly retaking the lead only for Marquez to power back through denying him for the second time this season.

Marquez wrapped up the race win and the World title while Quartararo had to settle for second.

“Of courses I’m happy,” said the rookie. “I’m very proud of my team and my job.

“To fight until the last corner… I tried everything.

“If I didn’t try that move in the last corner I don’t home normal but I’m really happy about the race.

“The win is coming soon.”

They were joined on the podium by Vinales with the toothless Dovizioso crossing the line in fourth place.

Marquez’s sixth MotoGP title means only one year in this decade has the 26-year-old not been a World Champion on two wheels.

“I was planning this weekend to win the race,” he said.

“The championship didn’t matter or the distance to Dovi, my target was to find the best way to win the race and that is what I did.

“Amazing year, everyone at the team did an amazing job.

“Time to enjoy and celebrate this title.”

Help support journalists, the guardians of independent journalism, through our student media initiative that gives a voice to students and their generation! Find out more…Tags: MotoGPmotorsport