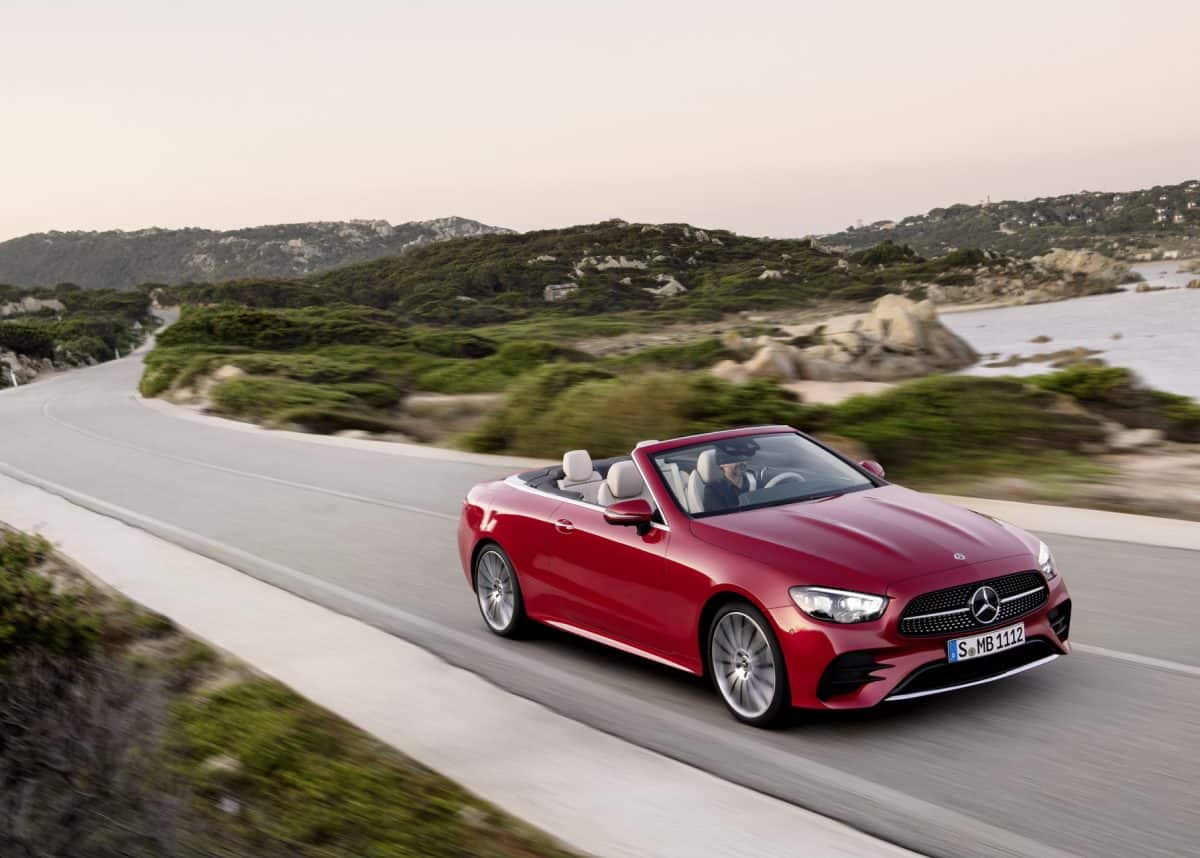 Mercedes-Benz has launched refreshed versions of its two-door E-Class models, namely the Mercedes-Benz E-Class Coupé and Cabriolets. After the updated sedan was launched earlier in 2020, these two models now complete local line-up. Engines on offer for the SA market are still not confirmed by Mercedes-Benz South Africa but we expect at least one diesel and two petrol engines to be available here in addition to the flagship turbocharged and electrically boosted 3.0-litre, six-cylinder mill.

The design updates to the Coupé and Cabriolet models is somewhat conservative with the largest exterior design news coming from a revised front and rear. The headlight designs have been tweaked to include changes to the lighting geometry inside the headlight housing. The housing itself is now thinner and sleeker. The grille too is slightly smaller and the front apron has been revised. At the rear, you’ll note a slight tweak to the LED taillights but other than that, it’s fairly similar to the pre-facelift model. New exterior colours and alloy wheel designs have also been added to the range.

As part of Mercedes-Benz’ electrification strategy, the company has introduced what they call EQ Boost as an electric partner to their combustion engines. The system makes use of a 48V electric starter-generator that improves fuel economy but also produces temporary bursts of additional power. This tech is now being offered on all 4-cylinder diesel and other 6-cylinder petrol models of the new E-Class. EQ Boost offers up to 15kW of power and 180Nm of additional torque.

Driving Assistance systems on the E-Class include semi-autonomous driving for those cars fitted with the Driving Assistance Package. On the new cars, Mercedes-Benz has revised the steering wheel both in design and technology. Now with capacitors underneath the leather wheel, the steering is better able to detect the driver’s hands when using semi-autonomous functions. Other interior highlights include sun-reflecting leather seats that are reported to reduce seat surface temperature by up 13 degrees celsius, a welcome touch in sunny South Africa. The 12,3-inch MBUX infotainment system screens remain an option now with the ‘Hey Mercedes’ voice control digital assistant.

First seen over two years ago, the E53 remains the flagship in the two-door E-Class range. The 3.0-litre, turbocharged and EQ-Boosted inline six-cylinder engine remains unchanged with 320kW of power and 520Nm of torque. 0 – 100km/h is dealt with in 4,4 seconds if you’re piloting the Coupé. Cabrios will hit the 100km/h mark just 0,2 seconds later. But none of this is news. The news is mainly in the cosmetic and technology department.

You’ll be hard pressed to tell the exterior differences if you don’t look too closely. But the E53 has also had slight changes made to headlights, front apron, air intakes and radiator grille. A new option (across all AMG) is the grille with vertical fins finished in dark chrome. The sleek Coupé silhouette holds matte black alloys with AMG-badged calipers inside the 20-inch wheels. Inside the cabin, there are more signature AMG touches including a new titanium-grey seat colour with red stitching. The new AMG-performance steering also adorns the new E53 4MATIC+ Coupé with new toggle switches for the Dynamic Driving mode selector. For the first time you can order the car with the AMG Dynamic Plus Package which comes with Race Mode as well as the Drift function that was made famous by the ballistic E63S. There’s also a new toggle switch for the AMG Dynamics system that engages an integrated vehicle dynamics system that auto adjusts systems according driving style.

Pricing and scheduled local launch was not yet available for the SA market.

If you are a freelancer looking to contribute to The South African, read more here.

Help support journalists, the guardians of independent journalism, through our student media initiative that gives a voice to students and their generation! Find out more…Tags: Mercedes-Benz