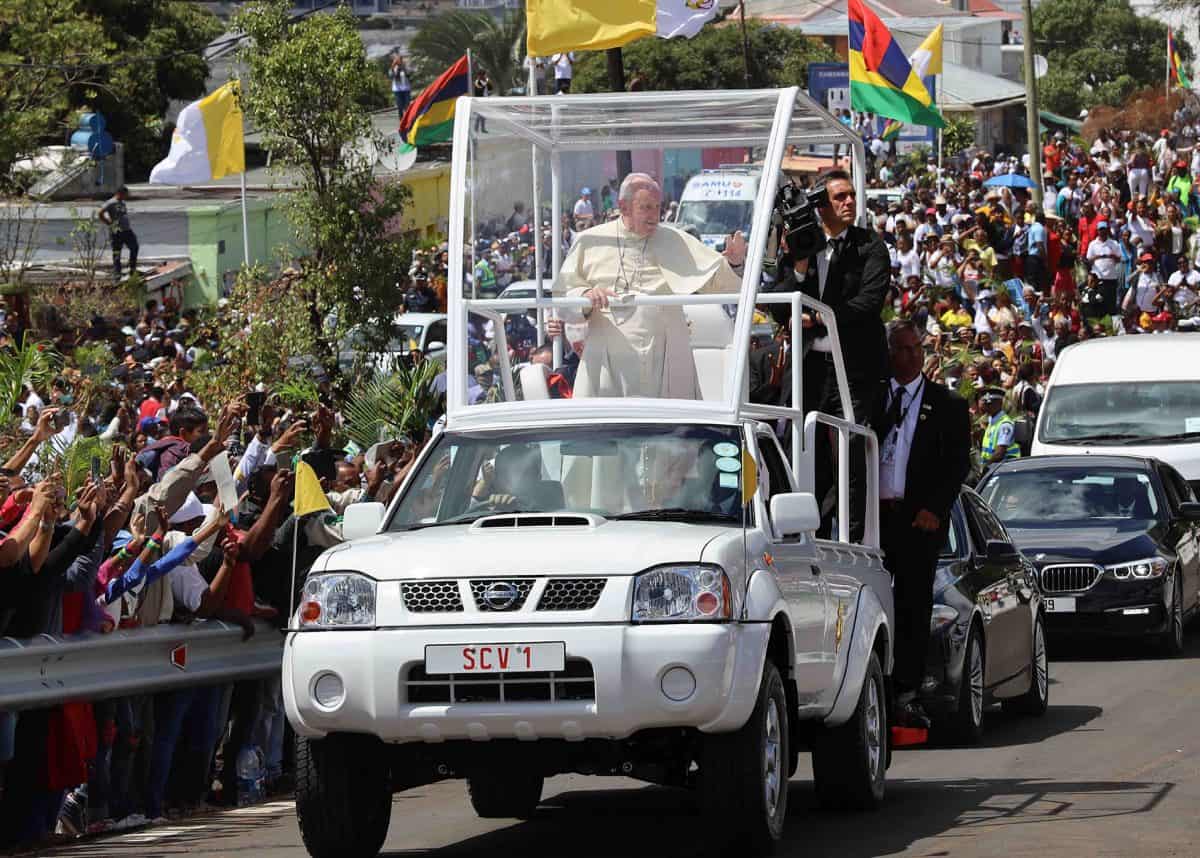 Although the Pope never drives, he has an impressive vehicle collection.

For decades the world’s automotive brands have been building and supplying custom vehicles for the Pope, as he journeys far and wide, to appear before followers of the Catholic church.

Popemobiles have specific requirements. They must be able to cruise at very slow speed, without overheating.

Another perquisite is that the Pope must be easily visible, when onboard a Popemobile.

Bakkies are especially popular as Popemobiles, because they have the ride height and loadbox space to create a bulletproof standing area for the Pope.

The most recent addition to the collection of Popemobiles, is a Nissan bakkie.

Pope Francis is touring Africa on a three-country visit for October 2019, which includes Madagascar, Mozambique and Mauritius.

To supply transport for his Mauritian visit, the Vatican took option on a Nissan which will be very familiar to South Africans. The model in question is Nissan’s NP300.

Nissan’s Rosslyn factory, in Tshwane, builds NP300s for both the local and export markets. Most of its bakkie production is destined for African distribution.

Amongst Nissan’s most successful African markets, is Mauritius. The local distributor there, is ABC automobile, which has been importing Nissans to Mauritius for the last 34 years.

ABC automobile conformed to all Vatican requirements for a Popemobile, providing a customised NP300.

This bakkie was built with a special rear staircase, to allow Pope Francis easy access to its load area.

A glass cover was constructed too and there are tubular side rails, which helped Pope Francis to brace himself whilst standing and waving at the Mauritian crowds.

ABC automobile also allowed for a large rear step area, to accommodate the Vatican bodyguards, who are always within only a few steps of Pope Francis during all public appearances.

Mechanically the Popemobile NP300 is similar to what you can buy in South Africa. Characterised by its bonnet scoop, the NP300’s 2.5-litre turbodiesel engine boosts 98kW and 304Nm.

It might be an unconventional choice for a Popemobile, but the NP300 is very appropriate to this task. With an engine that produces peak torque at only 2000rpm, and a very low first gear ratio, it can crawl along at walking speed without bother. Which is exactly what it did, in Mauritius, for Pope Francis.