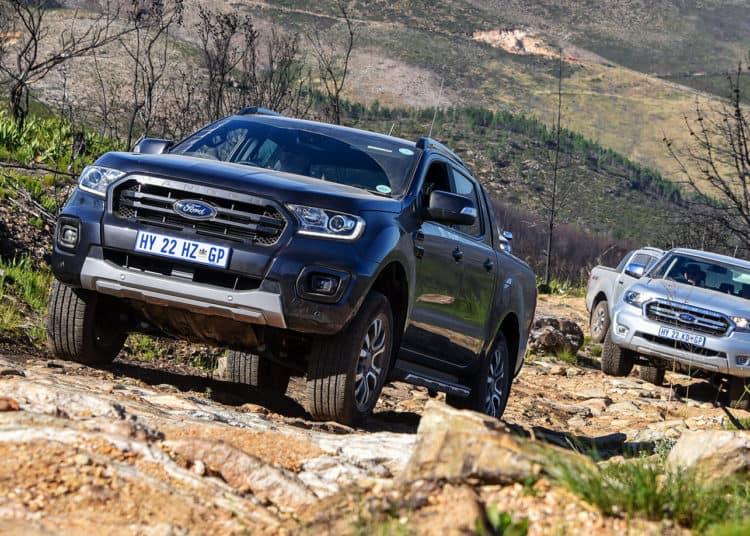 Ford is making its most serious attempt in years to wrest the title of most popular South African bakkie from Toyota’s Hilux.

The American auto giant launches a new version of the popular Ranger bakkie in South Africa this month and this evolution of Ford’s T6 platform features a collection of impressive upgrades.

Renowned for its handsome bakkie styling, the new Ranger differs little from the 2018 model, but for a new front grille design, reshaped bumper and slightly more advanced LED headlights. A fantastic convenience feature is the integration of a torsion beam to the tailgate’s mechanics, which now required 60% less effort to lift and close than before.

Inside there is even less differentiation in terms of cabin architecture, but the suite of advanced driver assistance systems has been upgraded.

Ford can now claim to have one of the most advanced and safest bakkies on sale in South Africa, having equipped new Ranger with pedestrian recognition for its autonomous emergency braking system. It also gains self-driving parallel parking assist, allowing you to manoeuvre the Ranger’s larger dimensions into a tight parking with absolute confidence, as sensors steer whilst you simply control the throttle and brakes.

This advanced 2-litre engine produces 157kW and 500Nm, which makes it more powerful than the 3.2-litre five-cylinder, which has traditionally headlined Ford’s local bakkie range and continues to be available as an option with the new Ranger. Ford will also be offering a less powerful and more affordable version of the 2-litre turbodiesel, with only one turbo, boosting 125kW and 420Nm.

Paired with these new 2-litre engines are ten-speed automatic gearboxes, which promise to deliver a tremendous blend of responsiveness and fuel economy. No other local bakkie rival offers a gearbox with more than eight gears and Ford now commands a definite advantage in drivetrain appeal with its new Ranger. For those bakkie customers who use their double-cabs off-road, it is worth noting that combined with low-range these 2-litre Rangers now boast 20-gears with the 4×4 system selected.

Pricing starts at R287 100 for a basic specification 2.2-litre single-cab, whilst the R514 300 gets you the most affordable of those new 2-litre engines, in 4×2 double-cab configuration with a 10-speed automatic gearbox. If you desire a 4×4 version of that, the price rises to R570 200. As a candidate for the best value offering within the new Ranger portfolio, it must certainly be this 2-litre single-turbo XLT double-cab 4×4.

For those who desire the performance of that most potent Ranger offering, they will have to buy into the outlandishly styled Wildtrak versions, which are the only new Rangers powered by the 157kW 2-litre bi-turbo. Pricing for these are set at R632 300 for the double-cab 4×2 and R678 200 for the 4×4.