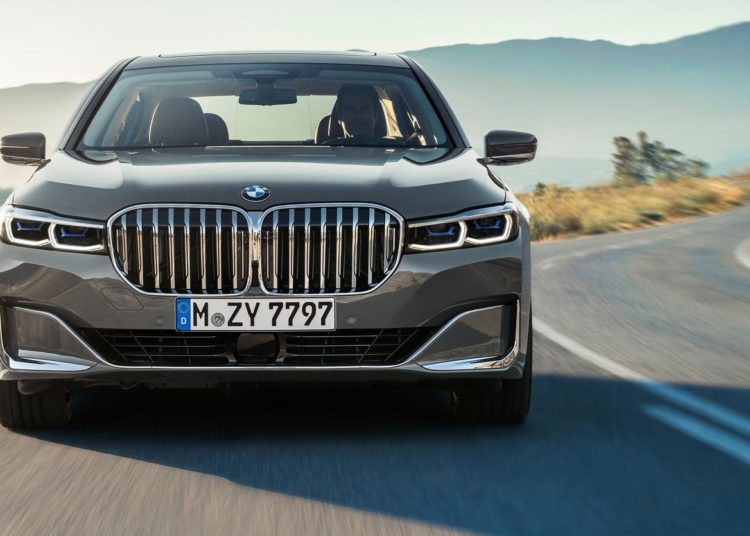 BMW has revealed the latest version of its 7-Series limousine, featuring a very daring design upgrade.

The last time BMW’s large limousine courted this much styling controversary was with the fourth-generation car, more than a decade ago. An anchor feature of the revised sixth-generation 7-Series is its enormous kidney grille, which is now 40% larger than before.

BMW’s iconic design motif dominates the limousine’s redesign, although it is balanced by slimmer rear light clusters. Overall the new car is only 22mm longer, whilst its height and width remain unchanged.

Framing the iconic kidney grille are new laser lights, which have intelligent adaptive properties, which mean they don’t dazzle oncoming traffic, yet still provide a phenomenal 560m of forward beamed illumination at night.

Powering the revised 7-Series are a range of familiar engines. The range peaks with BMW’s M760, driven by a turbocharged 6.6-iltre V12 good for 447kW. Most customers will probably opt for the 750i, powered by BMW’s renowned 4.4-litre twin-turbo V8, which has been tweaked to produce the same power as before (390kW), but 100Nm more torque, peaking at 750Nm.

Munich’s finest vehicle engineers have also committed to offering a plug-in hybrid 7-Series, blending a six-cylinder petrol engine and electric motor, combining to produce 290kW – which is good enough for a benchmark 0-100kph sprint time of only 4.9 seconds. Engineers at BMW are not at liberty to disclose how light on fuel this hybrid 7-Series is, but confirmation should come before the range is delivered to global customers in the next few months.

As the consummate luxury BMW there are a host of tiny details which make the new 7-Series that much more special. Its windows and windscreens are 5.1mm thicker, for superior sound insulation, and the windows electric motors are recalibrated for more precise winding.

BMW’s new 7-Series is scheduled to be introduced to the South African market during Q2 of this year, with a line-up three derivatives strong.