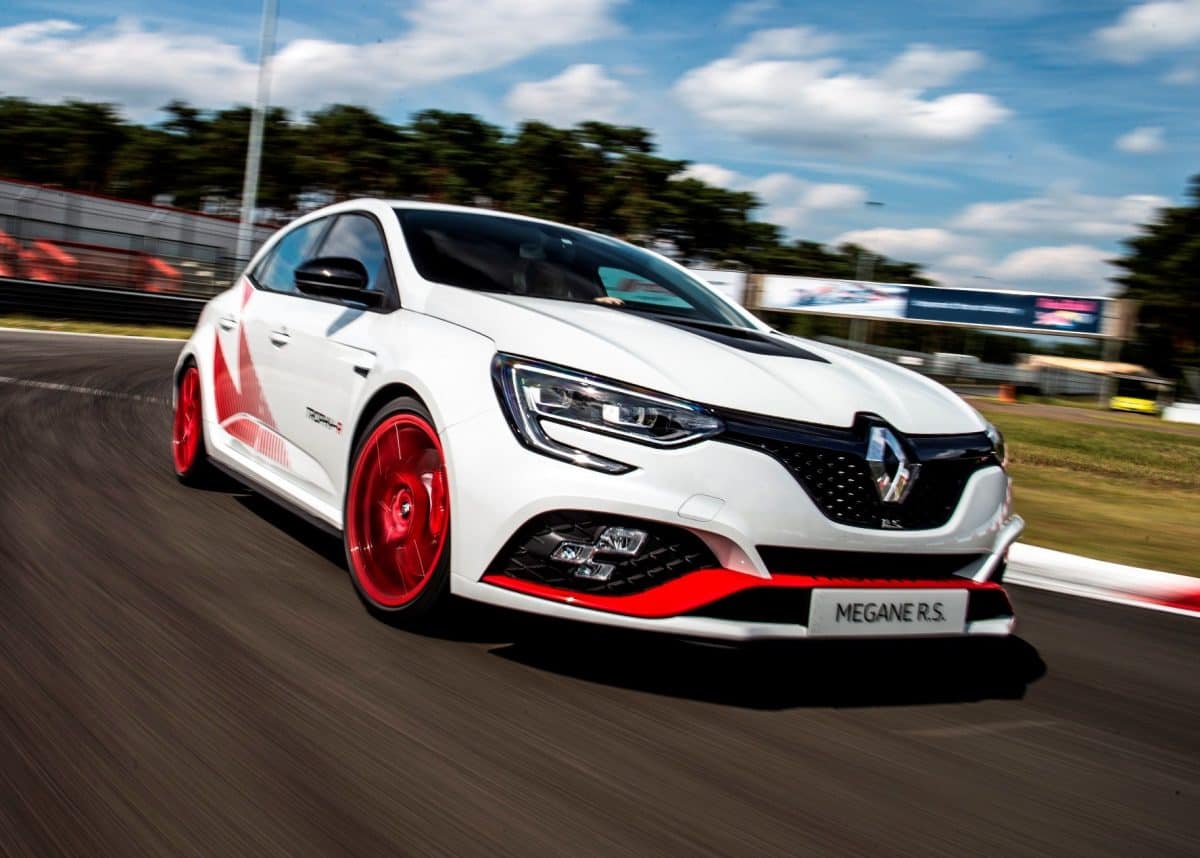 Renault has an enviable reputation for building some of the best front-wheel drive performance cars around and its latest Mégane RS Trophy-R reinforces the point.

Although Renault engineers have not added any addition power to the Mégane RS’s 1.8-litre engine, there are a host of very impressive technical upgrades which gift this new Trophy-R its status.

Whereas Renault’s German hot hatch rivals might be more powerful, and use all-wheel drive to guide the driving experience, the French approach is slightly different.

For the team of engineers tasked with developing the new Renault Mégane RS Trophy-R, their aim was to deliver a uniquely rewarding driving experience – instead of merely boosting more power and trimming time from the car’s acceleration statistics.

Distinguished by its mother of pearl paint finish and bold red graphics, the Trophy-R is lighter and features more sophisticated suspension and brake components than any other Renault Mégane.

Performance by virtue of lightness

The bonnet is carbon-fibre, which saves 8kg over a metal one, and features an aero cut-out. A redesigned rear-axle, unique to the Trophy-R, saves 32kg, and the car’s battery is also much smaller than a conventional Megane’s.

Around the rear there’s a carbon-fibre diffusor and the wheels are also composite. Windows are thinner and there isn’t a rear wiper – or even rear seats, for that matter. Total weight savings equal 130kg, which mean that at 1306kg, this Trophy-R is one of the lightest of all hot hatches.

Due to the extreme weight saving regime applied by Renault’s technical people, there was no requirement to boost engine power. The 1.8-litre engine is good for 220kW and 400Nm, exactly the same numbers that it produces in a standard Mégane RS.

A six-speed manual transmission means this Trophy-R runs 0-100kph in 5.4 seconds and registers a  top speed of 262kph. But those statistics do not capture the intricate driver appeal of this ultra-lightweight Renault.

The Trophy-R’s ability to find traction and glide over bumps is improved with Ohlins adjustable dampers, sourced from Sweden, and the suspension geometry has been altered to allow for more negative camber. Ride height can be adjusted 16mm lower, too, to reduce the car’s centre of gravity.

For the committed hot hatch enthusiast, these new Mégane RS Trophy-R cars will be the definition of purist front-wheel drive motoring. Don’t expect to see many around, though, as global production has been limited to a mere 500 units, with deliveries starting this October.