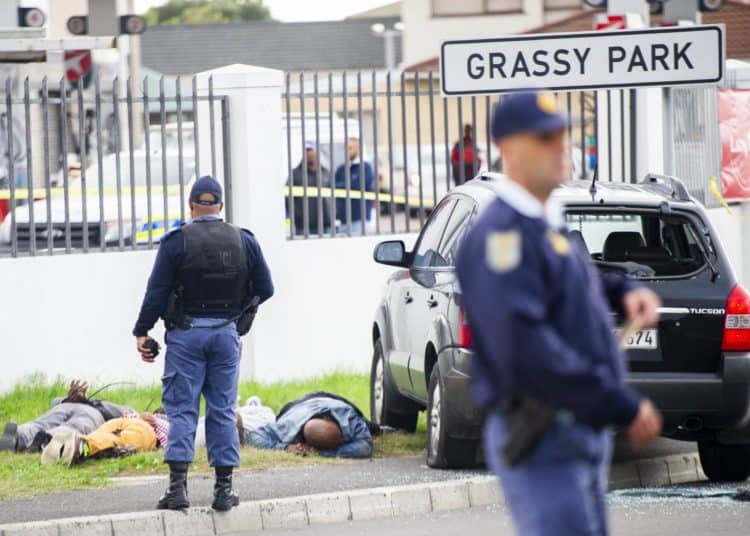 CAPE TOWN, SOUTH AFRICA – MAY 23: Police are seen at the crime scene where five suspects were arrested after a botched hijacking in Grassy Park on May 23, 2018 in Cape Town, South Africa. According to SAPS report, the National Intervention Unit members arrested the men, aged between 24 and 36 following a high-speed chase after a briefing about a hijacked vehicle. (Photo by Gallo Images / Netwerk24 / Jaco Marais)

The scourge of vehicular crime, armed hijacking, in particular, is a constant fear in the minds of South African motorists.

Crime statistics released by the South African Police Service (SAPS) reveal that one vehicle is hijacked every 32 minutes. According to the report, obtained by Wheels24, a total of 12 743 vehicles were hijacked in South Africa between April and December 2016.

Hijackings on the increase

These statistics show that hijackings are becoming more frequent, with reports increasing 14.9% from previous years.

Understanding the nature of crime is complex, with most law-abiding citizens unable to justify particularly violent actions for, what is revealed to be, limited financial gain. The psychological trauma incurred during a vicious hijacking can be debilitating, not to mention the physical agony sustained during violent assaults.

Ryno Schutte, managing director of Pro-Active SA, decided to get into the minds of two reformed hijackers who have both served time for their crimes.

The mind of a hijacker

Delving into the psyche of the hijackers provides insight into their modus operandi, which in turn can determine the outcome of a life or death situation.

Schutte maintains that although his informal case study in no way can apply to all hijackers, it does offer up insight into the mind of a criminal, saying:

“One needs to take into consideration that the information mentioned cannot be generalised, but there are huge similarities on the way criminal organisations operate.

To get a better understanding on the backgrounds of the two ex-convicts it became clear during our discussion that there is not just one path that a ‘hijacker’ follows.

Both ex-cons came from two different walks of life but they both confirmed some sketchy yet valuable insight into hijackings and organised crime. It was confirmed that the suspects received around R5000 – R7000 for a German manufactured vehicle.”

Hijackers given a ‘hot-list’ of cars wanted

What was revealed during the interview between Schutte and the two felons is that desperation resulting from unemployment led them to a life of crime. As they grew older, they adapted their methods and joined syndicates which would give them ‘orders’.

These ‘orders’ were requested from high ranking bosses in the criminal organisation. The convicts revealed that cars targeted by hijackers were subject to scrutiny, their plan of attack carefully planned out, saying:

“We would get a list of vehicles to search for during the week. Most cars are chosen not just minutes before the vehicle is stolen but even days or weeks before depending on the make. We study our victims and attack when they least expect it.”

Hijacking not usually done at random

The hijackers also made use of ‘informants’ who would relay information back to them regarding the marked vehicle:

“Victims are followed for days and even weeks before being hijacked and we used “informants” that do not look suspicious and fit into an area.

We would sometimes use other stolen or hijacked cars to follow victims. If time ran out to find a car on the list, we would hijack a random car of the same make.

We will still get paid but get a lower amount. Some vehicles are worth more in parts.”

How much are stolen cars sold for?

As is usually the case, criminals doing the dirty work are meagrely rewarded, while their superiors reap the benefits. This was confirmed by both ex-hijackers, who said:

“A R500 000 vehicle would be sold to a dealer for a mere R7000. We did the dirty work by hijacking a vehicle. It’s the stolen vehicle dealers and the “Bosses” that make the money.

Best of all was not just the money for the cars but also being able to sell anything in the vehicle like laptops, cellphones and jewellery from the victims.”

One of the ex-hijackers revealed his remorse for the victims of his crimes, saying:

“I did feel sorry for the victims but I had a job to do. When I hijacked a car I was just as nervous as the victims and the hijackings could have gone wrong very quickly but I’m glad that it didn’t.”

What can be gained from this interview is that permanent vigilance needs to be a motorist’s main priority – not just while driving, but before entering or exiting a vehicle too.

Staying safe on the roads

Pro-active SA has outlined some safety tips for motorists:

While operating your vehicle:

Stay off your phone. Not only are you at risk for being involved in a car crash, you’re are also placing your fellow drivers and loved ones at risk. Not to mention it is illegal. Put your phone on silent and out of reach while driving.Be vigilant at all times and report any suspicious behaviour to the SAPS and your local security service provider.If your windscreen or tyre is damaged while driving, drive to a well-lit area before stopping to inspect the damage.Do not stop for anyone that might indicate they are in need of help in deserted or high-risk areas. Contact Law Enforcement, the SAPS or Security Company to assist.Take a different route daily when leaving home or returning home. Criminals pounce on the fact that we are following the same routine and routes.Though there is a misconception that only certain makes and models are being stolen or hijacked, if there is a need for a certain make or model vehicle in the vehicle crime market will any vehicle become a target.Lower your music, eliminating distractions and be extra vigilant 1km from your destination, ensuring that you are not being followed.Park parallel to your home opening the gate prior to pulling into the driveway. Parking in your driveway while opening your gate might get you boxed in.

If you are hijacked:

At no given time resist the attacker or suspects.Keep your hands visible at all times as the suspects are as nervous as you are.Be submissive and listen to the suspects’ instructions.Do not resist once you have exited the vehicle.Place your child that is in a baby seat behind you to remove the child with ease. Indicate to the suspect that you have a child in the back seat and remove the child by shielding him/her as much as possible.Remain calm and try to identify any useful information about the hijackers without staring at them.Take note of the Language the suspects speakCount the number of voices.Listen to the information the suspects share amongst themselves and possibly via cellphone.Estimate the height of the suspects by comparing it to your own height.Identify any clothing, markings and shoes of the suspects. Some suspects change their clothes but not their shoes.Help support journalists, the guardians of independent journalism, through our student media initiative that gives a voice to students and their generation! Find out more…Tags: Crime, Courts and Justicemotorist