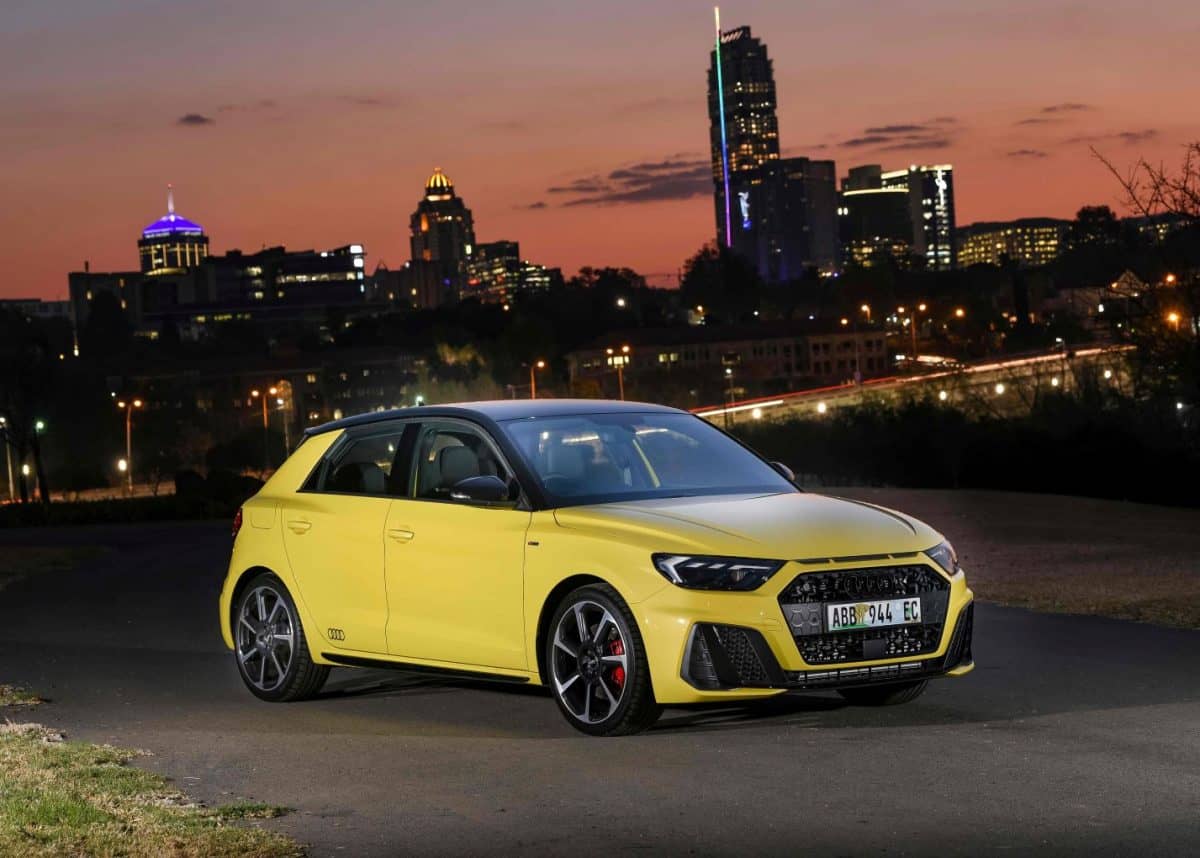 If you’re used to the Audi naming convention by now, “40” means the car’s power output is between 125kW to 168kW. In this Audi A1 version, the power is specifically 147kW from the well-known EA888 2.0-litre turbocharged petrol engine that is employed in a variety of other Volkswagen group products.

The A1 is punchy from the get-go as told by the gruff engine noise on start-up and by an eager lurch as you pull off in first gear or reverse. It’s quite a surprise and seems to catch out every now and again. There’s no slow and smooth pull off here.

Nonetheless, the engine pulls strongly, making good use of those horses all clambering to find traction through the front wheels. The car torque steers a little, but it’s not unmanageable or too untidy, ably sorted as the speed climbs and you manage the direction through a fantastic, leather-wrapped, flat-bottomed steering wheel.

This 40 TFSI motor is mated to the six-speed dual clutch transmission that Audi calls S-tronic. It’s a fast-acting component adding to the overall feel and rewarding the driver with choosing the right cogs at the right time.

Just enough room for the S1…

It feels as if there is just enough power here – not overwhelming or scary and never lacking in punch for sharper driving and urgent overtaking moves. They’ve left just enough room for the S1 which I assume will make an appearance soon enough.

Audi claims a 235km/h top speed but the gearing leaves me wondering how long it may take to get there (if you ever needed to try). It pulls hard and true all the way through the gears until around midway through fifth gear when it seems to lose some steam and drop off. It’s been tuned for the zippy short bursts of accelerative fun and less so for the longer higher speed stuff. Which makes sense of course – nobody is buying this as a GT.

It sounds good too, through an actuated exhaust. You get the occasional rumble and burble associated with this motor and transmission but it isn’t as loud as you may expect for a sporty hot hatch – again, quite possibly to make some room for the faster S1.

This 40 TFSI comes with what is called the Dynamic Package and this includes Audi’s Drive Select programme, effectively a “Sport Mode” button for a variety of driving moods.

Dynamic (Sport) mode sharpens everything up including the dampers for a harder and sportier drive. It’s an agile little car with enough prowess to hold your confidence and adrenalin, hardly ever feeling too edgy or hard to enjoy. It will understeer as you overextend its limits, but it has loads of grip through corners, in part thanks to its 18-inch Bridgestone tyres.

The Dynamic Package also includes larger brake discs for better stopping power. You’ll also tell these apart from other A1’s by their red calipers. The brakes are impressive and the ABS and EBD feel sufficiently urgent yet controllable even over wet or bumpy surfaces.

Hot hatches are meant to be fun and this little number (get it?) certainly is.

In keeping with the theme, Audi has created an entirely new cabin that ups the ante in ergonomics and technology. The dashboard and layout is very driver-focused, with all the controls and switchgear angled towards the driver. It’s very deliberate or at least feels that way in what is still a small cabin. The car I drove was equipped with a number of add-ons, such is the Audi way.

These included a R500 cabin inlay in grey patterned material; a R5 500 Phone-Box which essentially includes a wireless phone charger and improves signal quality in the cabin;  a R9 500 B&O Sound system and an ambient lighting package at R2 300.

These are not must-have items, but certainly add a touch of class and tech to the interior ambiance making it a stunning place to spend the considerable time we do in traffic.

In addition to these, the car was specified with Audi’s MMI Navigation Plus, Parking Aid, Rear View camera and Audi’s Technology package which joins the Audi SmartPhone interface for Apple and Android connectivity and the Virtual Cockpit.

In total, these items cost R50 000. Make no mistake, they’re all stunning pieces of technology housed in stunning interfaces with fast software and high-end graphics. The entire digital experience in this little car is indeed the technology of higher-numbered members of the Audi family.

They are so good, that they overshadow some poorer quality materials in the cabin particularly around the door handles and door inlays. These are quite disappointing in perceived value but I must also say that they’re small question marks if anything.

Not what you would call a family car

This is no family car…a point I proved in trying to pack my entire five-member family into the A1. A car seat for an infant will fit well enough, but it will eat up room for anything more than one more person or car seat which could be placed on the other side.

We tried to fit three children in the back, ages eight, six and three, but found that once the booster seat was in, one of the kids was suffering. Without the need for child seats, an average adult will squeeze into the back provided another average-sized or small adult is driving or in the front passenger seat.

Boot space is another area of improvement over the previous A1 and Audi claims a 330-litre boot with a 60:40 split rear seat as an option which increases the rearward part of the cabin to 1 090 litres.

Audi has tried/is trying to declutter the understanding and therefore choosing from the myriad of options available.

One way has been to provide packages that they’ve grouped into which a number of options fit together. As you climb up the ladder of model derivatives, they’ve added these packages to differentiate each model and it seems to be a good plan considering how many options there are. But you can add to these packages too.

On this 40 TFSI which is the flagship A1 for the time being, one of these packages is the S-line package which is the sportiest treatment you can get it. It adds more dramatic intakes to the front, side skirts and spoilers to the exterior treatment. 18-inch, five-spoke alloys add the next part of the sporty theme (another option) and then a Black Styling pack adds high gloss black finishes to the front spoilers, the rear bumper and the grille. (another option)

Overall, the design is stunning. More angled than before with some really interesting cues from Audi’s of yesteryear. You won’t be offended by this little thing – instead you’ll appreciate its attitude.

So what’s that problem then?

I rate the Audi A1 highly. It’s everything a hot hatch should be – but you have to buy it as such. What I mean is, if you buy the most base-level Audi A1, you won’t be getting the full experience some of which I’ve just tried to describe to you.

The Audi A1 40 TFSI that I evaluated was priced as follows: Base price R488 000. Optional Extras were R102 800. I could do away with about R30 000 from here and still be happy with the final product but that still presents a R550 000 car, the same price as a MINI JCW for your consideration. Some think that is quite expensive for an Audi A1.

Help support journalists, the guardians of independent journalism, through our student media initiative that gives a voice to students and their generation! Find out more…Tags: AudiAudi A1road test