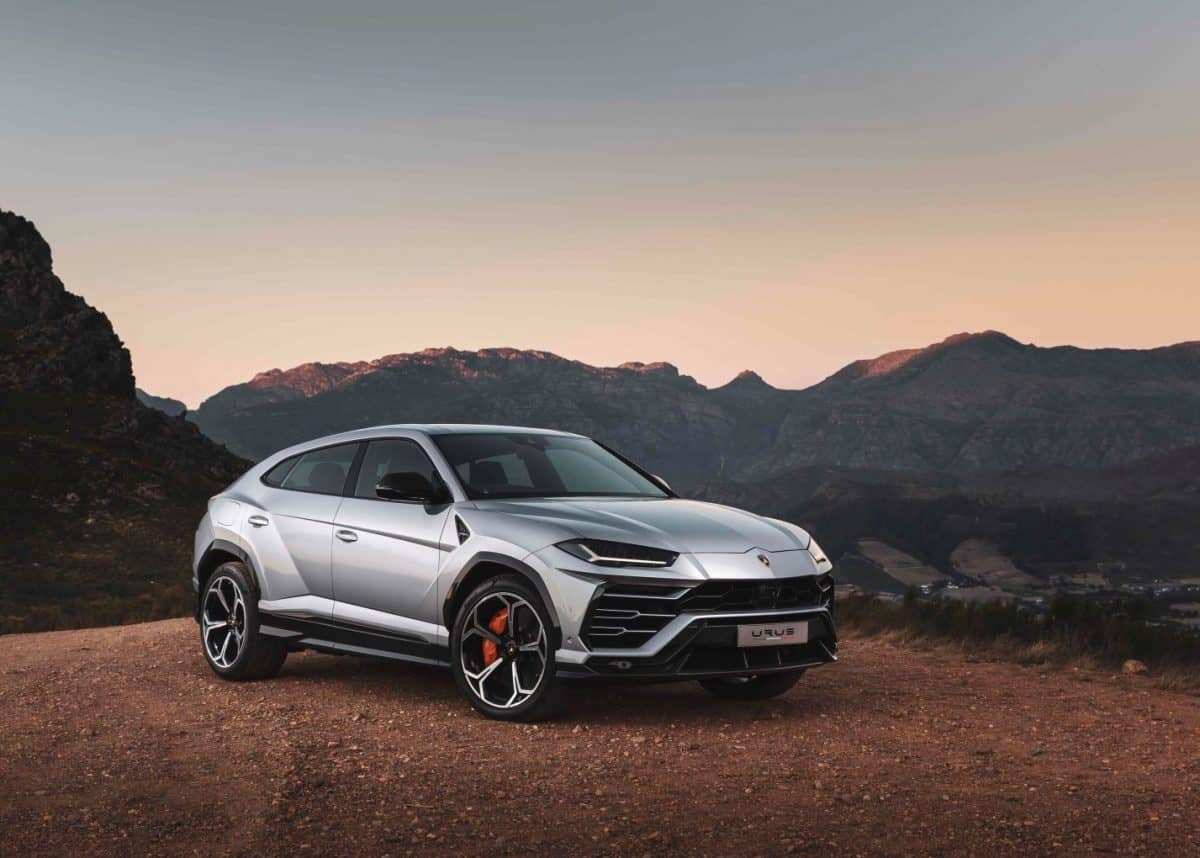 It’s not every day that I’m afforded an opportunity to drive any Lamborghini and while you may think it’s an immediately gratifying proposition, there’s always the consideration of its prolific reputation for being a stupendously expensive and fast automobile.

It’s not the kind of drive that you want to fluff up and so it’s approached with a cautious respect assisted by its on-paper credentials and leery YouTube videos going sideways on all manner of track.

There’s nothing mediocre about its design, its imposing and polarising in a way that only Lambo could do anyway.

At first glance, it feels somewhat disproportionate in areas. But stand closer and you start to appreciate the exceeding levels of detail in almost every crease and curve and panel.

There’s a Y-theme that is carried throughout the design of this car — from the headlights and tail lights, to the grille and bumper designs and even the meeting point of the front fender and door panel. It’s unashamedly Italian and you’ll know it most from the driver’s seat, in case the design didn’t hint at it.

Under VAG’s ownership, we’ve become accustomed to some “borrowing” of bits and bobs from Audi and there are a few in the Urus cabin too.

You’ll know the steering wheel and even be able to notice some similarities in the instrument cluster. The interior is a hyperbole in material-mix with hexagonal-stitched leather seats with this same hexagon-theme then carried into dashboard designs, air vent surrounds, door handles and more.

The main point of focus is the central stack and layout that features two 12.3-inch touchscreens, an advanced infotainment centre named LIS (Lamborghini Infotainment System). It’s a fully stocked infotainment system, beautifully designed with haptic feedback and all manner of connectivity and media.

The Urus I drove was specified with the optional 21-speaker B&O system for a superb soundtrack experience.

But there’s another sound we need to speak about. It’s a key question in any discussion on Lamborghini and in the case of Urus, one of the most pressing.

Another Urus first, is the introduction of a twin turbocharged V8 engine. This was necessary for the SUV because of its need for a broader competence in various applications like going off-road. A naturally aspirated V10 wouldn’t have had the low-end torque that is best suited to off-the-tar driving and let’s look at the numbers – it’s not lacking in power.

Power is an explosive 478kW and torque is a mammoth 850Nm from 2 250rpm. You won’t find these numbers on any other SUV at the moment.

So back to the sound. Floor the throttle and the Lamborghini Urus sounds like a menacing beast with a deep, guttural roar. It’s distinctive and sporty enough to set it apart, but it isn’t the earth-shattering clap that you get from its naturally aspirated, lower slung siblings.

This one sounds more tuned, more orchestrated – but make no mistake, it’s an intoxicating cacophony of pops and crackles and bangs, especially in its most vicious driver-mode setting.

It depends…do you want it to? From the driver’s perch, this is like no other Lambo I’ve driven. You sit high in a spacious cabin with lots of space and outward visibility.

The starter button sits under a fighter-jet style, red flip cover and this is located just below what is termed the Tamburo. Directly translated, it is the Italian word for “drum”, and it serves as the driving mode and gear selection nerve centre.

From here you can choose between six driving modes: Three of which are for on-road applications — Strada (street), Sport and Corsa (race). The other three modes are for off-road use — Sabbia (sand), Terra (off-road) and Neve (for snow).

Get into the right mode

In Strada mode, the Urus feels incredibly comfortable and constrained. Not like a Lambo at all, in fact, quite the opposite.

It plays the part of luxuriant cruiser with quiet aplomb. It’s easy to drive and it’s four-wheel steering is quickly felt in low-speed corners seeming to hug the inside lines more tightly. It doesn’t feel heavy or exhibit an excessively hard ride thanks to adaptive air suspension and an active roll stabilisation system that is constantly working out the kinks and angles from the road to deliver a more compliant ride.

It’s actually quite silent, but any fervent touches of the loud pedal render instant, torquey response. The power is there – just under immense control and subjugation.

Toggle the ANIMA lever on the Tamburo to Sport mode and the chapter changes to a more exciting and dramatic part of the driving story.

This sharpens the throttle response, lowers the ride height by 15mm and opens the exhaust valves for a more potent V8 symphony. In this mode, the Urus is spectacularly fast.

It hurtles to 100km/h in 3.6 seconds and then on past 200km/h (nine seconds later) to a top end in the nether regions of 305km/h. It’s hard to describe how quickly this car warps through the speed numbers. Unrelenting. Gut-punching. Mind-boggling.

The heads-up display is best used to keep your eyes on the road and consider what speed you’re doing as you gorge on stretches and stretches of road.

Through some of the Cape’s spectacular mountain passes, I was able to thoroughly test Lamborghini’s optimised suspension and braking system.

The Urus is fitted with the largest brakes they could find – 440mm at the front and 370mm at the rear. These are carbon-ceramic parts and they’re fitted as standard on the Urus. They work hard to bring a 2.2-ton SUV to a stop in no time but they sure do work.

Even from high speeds, the Urus is reined in without any unsettling weight imbalances. It’s unbelievably good on the brakes.

When we left the Lamborghini dealership in Cape Town, one of the technical team gave us something to think about in telling us to trust the engineering of the car:

“You’ll find yourself getting into a corner faster than you thought was possible. Don’t panic and trust the car. It will turn in and exit the corner without any problems.”

At our first mountain pass, I found myself thinking about Salim’s words. Exiting a corner much faster than I anticipated, the Urus was unflappable.

It brakes, turns in and then manages the grip, weight, all-wheel steering, yaw rates and driver inputs to calculate how best to get through a bend with as much speed as possible and as little fuss as possible.

It’s uncanny how such a SUV is able to do so. The Urus carves through corners with sports car competence and confidence. This is all the more important here – there’s a real sense of confidence when you drive this car in Sport mode. It’s blisteringly fast yet under complete control.

Switch the lever to Corsa for its most aggressive setting. This is best reserved for track use as it primes everything for maximum attack which I can’t think of any use for on public roads.

Corsa mode is wild in no uncertain terms. It frees up the traction control for maximum slip and the throttle response is immediate, followed by the fastest engine and gearbox combo available. This is the most hardcore serving of Lambo-ness altogether.

As a starting point, the Urus is priced from R3 495 000, but it will quite probably be optioned to suit a variety of tastes and preferences. There’s a plethora of options from which to choose and at this level, it’s important to have a car that is tailored to your specific needs.

The Lamborghini Urus reads like a tale of seemingly unrelated narratives morphed into one story. You may find its design somewhat uncomfortable. You may think it’s been watered down by bits and bobs from other members of the Volkswagen stable.

I thought that too until I spent some time behind the wheel in a variety of driving environments. Urus is an SUV. It does all the SUV stuff you’d expect of it. It can be optioned with an off-road package with the right tyres and undercarriage protection should that be your need.

It can carry five passengers and their luggage in absolute comfort and luxury. It can deliver a comfortable everyday driving experience like any other high-end SUV – but Lamborghini has called this the first “Super-SUV” for a reason.

While it can do all these things, it can also deliver an unparalleled turn of speed and dynamic ability, in a way that very few other SUVs can muster. Yes, I must admit, it feels like there’s a host of computers and sensors that are keeping it all in check — too much so at times — but the numbers don’t lie. Lamborghini has rewritten the fast SUV book. They’ve named it Urus.

Help support journalists, the guardians of independent journalism, through our student media initiative that gives a voice to students and their generation! Find out more…Tags: LamborghiniLamborghini UrusSUV