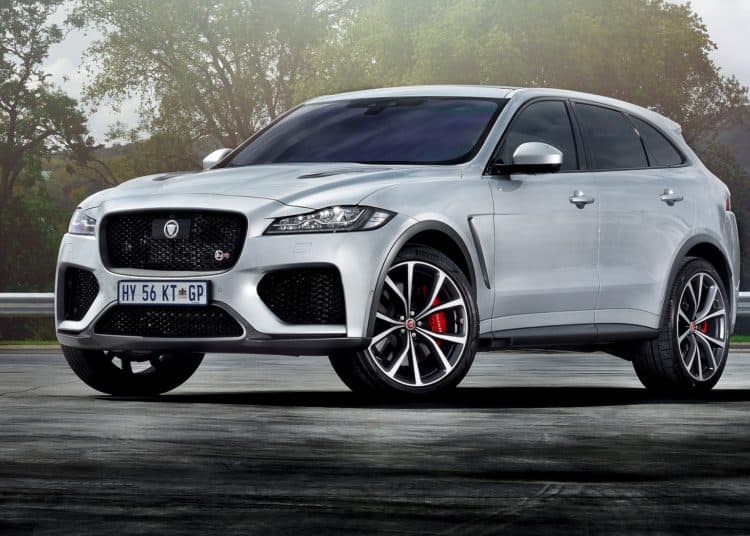 Jaguar’s fastest ever SUV is now officially on sale in South Africa and it is sure to alter perceptions of the brand’s all-wheel drive vehicles.

The transition from a pure sportscar brand, to one which also markets SUVs, has been a radical departure for Jaguar and although traditionalists were initially uneasy with its change in product strategy, this latest F-Pace should assuage all their doubts.

The vehicle in question is Jaguar’s F-Pace SVR and it prices at R1 499 400. Positioned as a rival to the Porsche Macan, F-Pace faces very credible competition, but Jaguar is confident of this SVR version claiming its share of the South African premium SUV market.

SVR is the first F-Pace to feature a V8 engine and at 5-litres of capacity, it is much bigger then the previously largest engine on offer, a 3-litre V6. Supercharging boosts performance, with the V8 producing 405kW and 680Nm. Those engine output numbers are impressive and although the F-Pace SVR isn’t a light vehicle, weighing 2070kg, it is very rapid.

Top speed rates at 283kph and in benchmark acceleration tests, it run 0-100kph in 4.3 seconds. Balancing the SVR’s storming performance are larger brakes than any other F-Pace and a suspension set-up which is stiffer, to resist body roll during high-speed cornering or emergency braking.

Signalling its performance potential to rivals and other road users are several SVR-specific styling details. The wheel arches are larger and flared, to accommodate 22-inch alloy rims, and there is a reshaped front bumper section, which is more aerodynamic than also helps feed a greater volume of cooling air to that large capacity V8 engine. Cooling is a priority, and as such, the bonnet also features additional air-intakes.

Viewed from the rear, SVR is distinguished by quad-tailpipes, a typical feature of V8-engined performance vehicle, which measure 84mm in diameter – and ensure a characteristic Jaguar growl during peak acceleration.