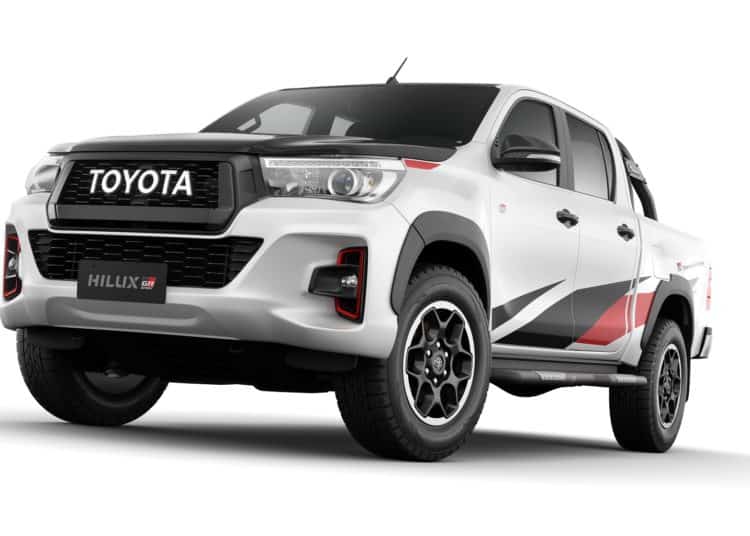 When you win the world’s toughest off-road race, celebrations aren’t limited to spraying Moët on a podium in the Atacama. Toyota South Africa has revealed a celebratory Hilux special edition double-cab, paying homage to the locally-built bakkies which triumphed at this year’s Dakar rally raid in South America.

The Hilux hardly needs any additional marketing impetus, as it already dominates the local bakkie and overall vehicle market – but Toyota is justifiably proud of what its indigenously engineered racing bakkies achieved at the 2019 Dakar. A special edition production bakkie to celebrate this achievement, and share the joy of ownership with customers, was an inevitability.

This special edition Hilux will be limited to a mere 535 units and be marketed under the GR-Sport name. Although pricing will only be announced closer to the GR-Sport’s market debut, later this year, Toyota has confirmed the specification.

Distinguished the GR-Sport from other Hilux double-cabs is bold ‘Toyota’ grille badging (instead of the company’s traditional spherical logo), black exterior trim details and motorsport inspired side graphics. If you order a white one, which we suspect will be the most popular colour, there’s a contrasting black bonnet.

Inside the GR-Sport you’d find a host of Gazoo Racing components: including a start button, branded floor mats and logos scattered all over the seat upholstery, which is perforated leather, with red contrast stitching holding it all together.

Powering the GR-Sport Hilux is Toyota’s proven 2.8-litre turbodiesel, boosting 130kW and 420Nm, driving through a six-speed automatic transmission. Although the engine and drivetrain are unchanged, the GR-Sport does feature a slight mechanical upgrade from all other Hilux bakkies.

Eagle eyed Hilux fans will notice that it rolls 17-inch alloy wheels, instead of the 18-inchers most Hilux double-cab 4x4s come equipped with. The reason for those inch smaller wheels is that GR-Sport runs more rebound resistant front springs and twin-tube dampers, with trick valving.

Combining the suspension upgrades with a slightly smaller wheel, rolling a larger tyre with greater air volume, mean that this Hilux is less likely to bottom out or bump its front bumper if you are speeding along off-road.